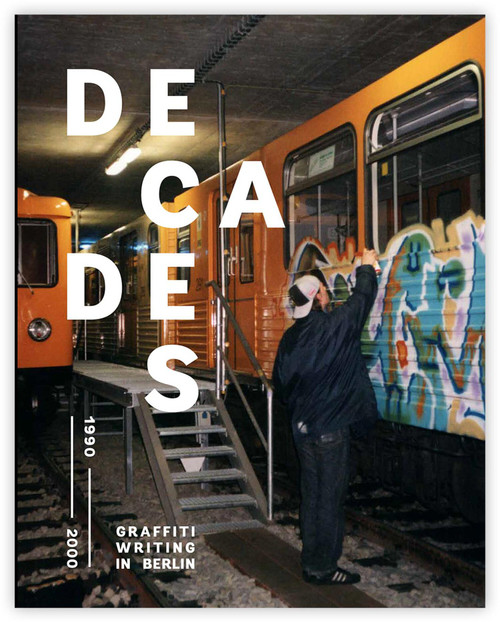 This first volume is the beginning of a trilogy of books (Vol. 2 2000-2010 / Vol. 3 2010-2020) presenting 30 years of graffiti in Berlin. With a selection from thousands of photos, a picture of the development of the graffiti subculture in Berlin emerges in an authentic way. In addition, a variety of personal texts by the authors give an intimate insight into their experiences and perspectives. On the one hand, these texts convey a very vivid picture of the life of the Berlin graffiti scene, on the other hand, they allow the reader to experience the Berlin of days gone by.

The first issue portrays writers and crews between 1990 and 2000, with the fall of the Wall kicking off the graffiti boom in Berlin. In the aftermath, a huge adventure playground opened up for Berlin writers, with unresolved police courts and a sometimes disoriented adult world creating the ideal breeding ground for what is now probably the largest and most active graffiti scene in the world. The focus is on the application of graffiti on trains, which is also the subject of most of the pictures and texts in the book, but uncensored private pictures and graffiti on walls are also presented.

This first volume contains portraits with many photos and personal texts or comments of the following graffiti authors and crews:

Also included in the book are mixed chapters with hundreds of photos of many other graffiti writers and crews from the 90s.

DUE TO THE WEIGHT OF THIS BOOK, A SUPPLEMENT WILL BE CHARGED FOR SHIPPING

The Faith of Graffiti Book